JoyVIVA: Tools for the Fit & Fearless

JoyVIVA is much more than just an online beauty and wellness store. We’re a collective of beauty, wellness, and skin care professionals who are committed to delivering quality products, professionalism, and knowledge.

Spoiler alert: I finished it ☺

At the athlete briefing on Friday, the race director warned us to be prepared for the unexpected. “Your race won’t necessarily go as planned,” he said. He was right. But a few of my expectations were spot-on.

I expected it to be the hardest thing I’d ever done: it was.

I expected it to be one of the greatest experiences of my life: it was.

I discovered that a Snickers bar is maybe the best thing of all time when you’re at the top of your second climb up Callaghan in brutal heat and basically hating your life. The second best thing is chicken broth, 30km into a marathon, when the sun’s going down and you’re still a long way from the finish line.

Friends and family came to watch us. Seeing them by the side of the road cheering us on was amazing. If you ever think it doesn’t make much difference whether you show up or not to watch someone race: it does.

And if you can bribe them to pick up your gear before you get in, even better!

Race morning started with a 3AM wake-up. We arrived at transition by around 4:45, thinking we had lots of time. But we also brought a bike pump, which meant we were everyone’s best friend. It’s great to share your bike pump, but what we didn’t count on was the amount of time it took for everyone to use it. Suddenly the announcer was telling us if we wanted to warm up in the water, we had five minutes—and we hadn’t put our wetsuits on yet.

I always warm up before a race. It’s especially important to me if I know the water will be cold, because if you’re not used to the temperature, the shock of the cold water can send your heart rate into panic mode and it’s hard to get it under control again. So my daughter and I scrambled to get our wetsuits on—and that was when I realized I needed to go to the bathroom. I had a choice: bathroom, or warmup. There wasn’t time for both. Bathroom won (as it always does). My daughter went to warm up, I ran to the bathroom, and then we waited to start the race while I fretted about not having gotten into the water.

It turned out not to matter—I splashed water on my neck and face as I was going in, and it was fine—but it was an unexpected hiccup that caused unnecessary stress.

The swim was one of the most pleasant parts of the race. My time was slower than I’d hoped, but that was because I swam on the outside of the pack, 300m of extra distance—but it was worth it. I felt calm and strong the entire way.

The first loop of the bike was also particularly pleasant. The day hadn’t heated up yet, my legs were feeling good, and as I’ve said before—Callaghan once is fabulous. Climb it twice, however, and you might want to kill yourself.

By around 140km I was having issues with one of my shoes—something that has never happened before. It felt like my right shoe was three sizes too small and my big toe throbbed with pain. Plus it was hot outside. Plus I still had 40km left to ride, most of which involved climbing. I couldn’t help but wonder how I planned to run a marathon in that kind of pain.

When I reached the bike dismount line, I ripped off my shoes and ran to T2 in my socks. Really, just taking the damn shoe off made my toe feel better.

The run was slow, which I’d anticipated given my year of injuries. And my Garmin died partway through, which I’d hoped wouldn’t happen but sort of thought it would.

But a few things happened that I didn’t expect. First, I discovered how important it is to make friends on the run with someone who’s going at your pace. That was a game-changer. For the first 20km or so, I ran/walked with Andy, a guy from Fernie. We stopped and started at different times but would chat whenever we caught up with each other. It made the time pass nicely.

When my watch died, I was concerned that my pace would suffer. In fact, without the watch I ended up running far more than walking. It was better not to have it.

By the time I reached the 32km mark, I’d lost Andy and had made friends with a guy from Seattle named Scott. He saw the 32km sign and said, “That’s a 10k. It’s a training run. We can do that.” And I thought, hell yeah. That last 10km was the fastest of my marathon by far. We ran it out together, stopping only at the aid stations, and we finished strong.

I thought I would cry at the finish line. I didn’t. I did, however, cry on the bike—twice. The first time was out of overwhelming emotion: I was doing the thing I’d wanted to do for most of my life. The second was when I reached Function Junction and realized I only had about 20km left to ride.

Racing with my daughter was absolutely incredible. We started together, were in transition together, and passed each other several times on the bike and run. We hugged, laughed, and promised to help each other change flat tires (which never happened, thank God).

Having my son and friends on the sidelines was also incredible. They gave us energy when we needed it most. And we needed it often.

Other posts by Michelle Barker

JoyVIVA aspires to empower, inspire and support women in sport. We are proud to surround ourselves with a strong tribe of like-minded woman who do…

Say Hello to LIT Multisport, a Free Club in Vancouver that Empowers and Supports Women in Training and in Life   JoyVIVA is thrilled to…

4 Things About Vitamin D Every Female Athlete Should Know

It wasn’t until fairly recently that research linked vitamin D to more than just healthy bones. Today we know that vitamin D plays a role… 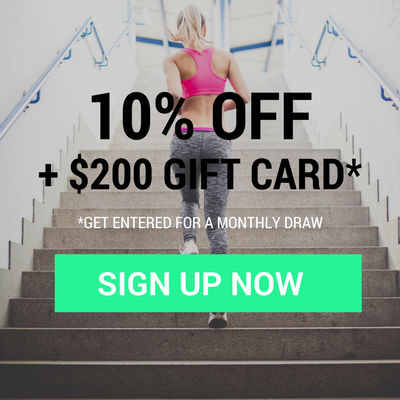